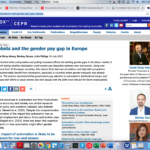 At a moment when policymakers are putting increased efforts into tackling gender gaps in the labour market, it is worth asking whether robotization could worsen pay disparities between men and women. Using new evidence from 20 European countries, this column finds that men at medium- and high-skill occupations disproportionately benefit from robotisation, especially in countries where gender inequality was already severe. The authors recommend that governments pay attention to automation’s distributional issues, and increase their efforts to equip women and men equally with the skills most relevant for future employability.